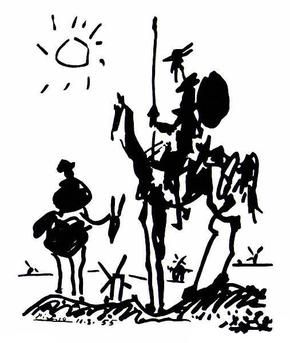 The Knight of the Sorrowful Countenance is turning 400. By some accounts, the first part of Don Quixote, Miguel de Cervantes’s masterpiece, was available in Valladolid by Christmas Eve 1604, although Madrid didn’t get copies until January 1605. Thus came to life the “ingenious gentleman” who, ill equipped with antiquated armor “stained with rust and covered with mildew,” with an improvised helmet, atop an ancient nag “with more cracks than his master’s pate,” went out into a decaying world where there were plenty of “evils to undo, wrongs to right, injustices to correct, abuses to ameliorate, and offenses to rectify.”

Cervantes catches a glimpse of the down-and-out hidalgo at around 50, the prime of one’s life by today’s standards but a synonym of decrepitude during what was considered Spain’s “Golden Age,” an appellation Cervantes complicates. The protagonist, we are told, is weathered, his flesh scrawny, and his face gaunt. We know nothing of his childhood and adolescence and only a modicum about his affairs, including that too little sleep and too many chivalry novels have addled his brain.

Almost 1,000 pages later, Don Quixote (or Alonso Quixada or Quexada, some names Cervantes gives to the hidalgo) lies on his deathbed. Finally, well into the second book, issued in 1615, Don Quixote dies — but only after an impostor, Alonso Fernxc3xa1ndez de Avellaneda, impatient that Cervantes kept procrastinating, brought out an unofficial second part that pushed the author to complete his work. Cervantes may also have been sensing that his own demise, which came in April 1616, was close.

About to die the exemplary death, Don Quixote is nevertheless consumed by the grief of countless defeats and frustrated in his impossible mission to see his beloved Dulcinea of Toboso. Is he wiser? Disenchanted? Does he die of melancholia? The limits of age?

“Don Quixote’s end,” we are told, “came after he had received all the sacraments and had execrated books of chivalry with many effective words. The scribe happened to be present, and he said he had never read in any book of chivalry of a knight errant dying in his bed in so tranquil and Christian a manner as Don Quixote, who, surrounded by the sympathy and tears of those present, gave up the ghost, I mean to say, he died.”

Don Quixote might be dead, but his ever-ambiguous ghost lives on. His admirers — and, in unequal measure, detractors — are legion. Operas, musicals, theatrical and film adaptations, as well as fictional recreations keep piling up: Laurence Sterne was inspired by Don Quixote’s misadventures when writing Tristram Shandy; Gustave Flaubert paid homage to him in Madame Bovary, as did Fyodor Dostoyevsky in The Idiot. Isaac Bashevis Singer’s “Gimpel the Fool” can be read as a reimagining of the knight’s simplicity. And so on.

Then there are the multilayered interpretations of Don Quixote’s pursuit. Anybody that is somebody has put forth an opinion, from Miguel de Unamuno, Josxc3xa9 Ortega y Gasset, Salvador de Madariaga y Rojo, and Amxc3xa9rico Castro, to name a handful of Iberians first, to Samuel Johnson, Denis Diderot, Franz Kafka, Thomas Mann, Lionel Trilling, and Vladimir Nabokov. Over the years, Don Quixote has been a template of the times: The 18th century believed the knight to be a lunatic, lost to reason; the Victorians approached him as a romantic dreamer, trapped, just like artists and prophets, in his own fantasy; the modernists applauded his quest for an inner language; the postmodernists adore his dislocated identity. Psychiatrists have seen him as a case study in schizophrenia. Communists have turned him into a victim of market forces. Intellectual historians have portrayed him as a portent of Spain’s decline into intellectual obscurantism.

Some scholars call Don Quixote the first modern novel, a bildungsroman that traces the arch of its protagonist’s life and the inner transformation to which it gives room. In the spirit of Erasmus of Rotterdam’s In Praise of Folly, parody reinforces the divide between the life of the mind and the strictures of society. Others stress the novel’s irony, the multiple voices and blurring of fiction and reality — the latter an aspect that Gabriel Garcxc3xada Mxc3xa1rquez would pay tribute to in One Hundred Years of Solitude. Don Quixote is one of the first characters to comment on his own readers (“for me alone was Don Quixote born,” Cervantes writes in the second book, in response to the publication of the sham version); he is caught at the turning point of the Enlightenment, between the secular and the religious, reason and belief. Detractors argue that Cervantes is a careless stylist and a clumsy plot-builder, pointing out the fractured nature of the novel, the endless repetitions.

No doubt all that would have come as a surprise to Cervantes himself, a tax collector with a tarnished reputation, a soldier whose old battleground glories and often pathetic dreams of literary success kept him alive. He envied Lope de Vega, the dramaturge of 1,000 comedias, and was looked down upon by the snobbish literary figures of his day. In short, Cervantes was an outcast. Indeed, in spite of all the hoopla, he remains one in Spain, perhaps because Spaniards today still don’t know what to make of him. In Madrid the house of de Vega has been turned into a museum; the one nearby where Cervantes wrote has been sold time and again, commemorated by a miserable plaque.

One wonders: Would Don Quixote pass the test and be published in New York today? I frankly doubt it. It would be deemed what editors call “a trouble manuscript”: too long, the story line problematic, the plot stuffed with too many adventures that do too little to advance the narrative and too many characters whose fate the reader gets attached to but who suddenly disappear. And that awkward conceit of a character finding a book about himself! The style! Those careless sentences that twist and turn!

The first part of Cervantes’s manuscript was sent (possibly under the title of El ingenioso hidalgo Don Quixote de la Mancha) to the Counsel of Castilla for permission to print it. It then went to the Inquisitorial censors for approval. Around August 1604, Cervantes tried in vain to enlist a celebrity to compose a poem eulogizing his protagonist, as it was the custom of the time to include such praise at the outset of a novel. He failed, his narrative considered too lowbrow, and composed his own poems.

For all that, the first part of the novel was successful early on. The initial printing of some 1,800 copies was quickly insufficient, and new editions were issued (including one in English in 1612). By the time the second part was released in 1615, Don Quixote was a best seller. The parodic quality of the novel, the way it pokes fun at erudition and paints love as the only redemption for the heart, enchanted readers. As did Cervantes’s digressions on his country’s delusions of grandeur.

In my personal library, I have some 80 different versions, including ones produced for children, as well as translations into Yiddish, Korean, Urdu, and part of the novel that I translated into Spanglish. I guess my collection is proof of my passion. I can’t think of a book that better illustrates the tension between private and public life, one that speaks louder to the power of the imagination in such an ingenious, unsettling fashion. If ever I wanted to live my life like a literary character, it would be as Cervantes’s sublime creation.

As the forerunner of antiheroes and superheroes, Don Quixote, with his flawed aspirations, may n
ot subdue giants or imaginary enemies like the Knight of the Wood, but he continues to conquer hearts, precisely because he is so ridiculous, inhabiting a universe of his own concoction. He is the ultimate symbol of freedom, a self-made man championing his beliefs against all odds. His is also a story about reaching beyond one’s own confinements, a lesson on how to turn poverty and the imagination into assets, and a romance that reaches beyond class and faith.

Some authors are so influential that their names have been turned into adjectives: Dantean, Proustian, Hemingway-esque. But how many literary characters have undergone a similar fate? “Quixotic,” “quixotism,” and “quixotry,” according to the Oxford English Dictionary, are all related to “Quixote,” “an enthusiastic visionary person like Don Quixote, inspired by lofty and chivalrous but false or unrealizable ideals.”

To be an underdog, to be a fool content with one’s delusions, is that what modernity is about? Or is it the impulse to pursue those delusions into action? Undoubtedly we will continue asking ourselves those questions as the enthusiastic visionary starts his fifth century, still as vibrant and mischievous, as resourceful and controversial as ever.

Ilan Stavans is a professor of Latin American and Latino culture at Amherst College. 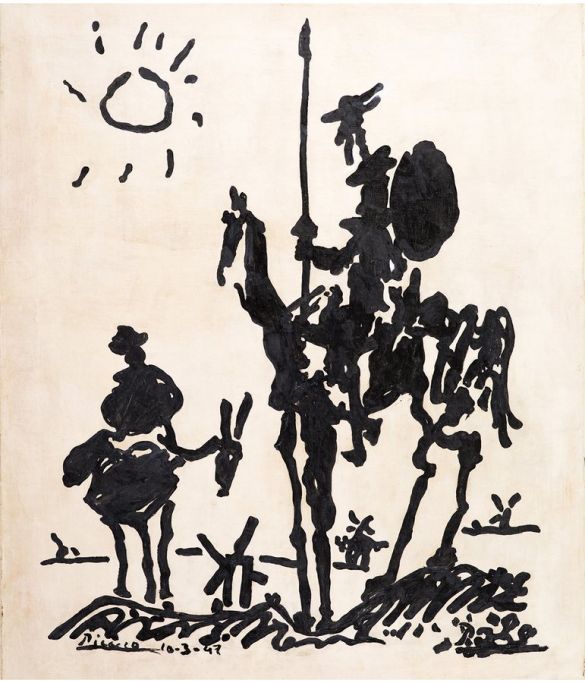